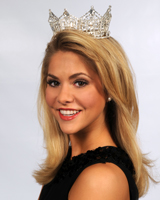 WASHINGTON, D.C. - The NAB Education Foundation announced today that Miss America 2008 Kirsten Haglund will make a special appearance at the tenth annual Celebration of Service to America held Monday, June 9, at the National Building Museum in Washington, DC. The celebration recognizes broadcasters for outstanding service to their local communities.

Haglund is an undergraduate at the University of Cincinnati and is working toward a degree in musical theatre. She is also the National Goodwill Ambassador for the Children's Miracle Network and works to raise awareness of eating disorders. In recognition of her academic achievement, leadership and community service, Haglund is a Cincinnatus "Century" Scholar. Other scholastic achievements include membership in the National Honor Society and placement on the University of Cincinnati Dean's List.

As previously announced, this year's Celebration of Service to America Leadership Award will honor entertainment industry icon Quincy Jones. Inside Edition host Deborah Norville will serve as master of ceremonies.

About Bonneville International Corp.
Founded in 1964, Bonneville Internationalâs heritage traces its early roots to KSL Radio, which first went on the air in July of 1922 (originally as KZN) in Salt Lake City and to KSL-TV, which had its on-air debut in 1949. Bonneville currently owns and operates 31 radio stations in the Chicago, Washington, D.C., Seattle, Phoenix, St. Louis, Cincinnati, and Salt Lake City markets, as well as KSL 5 Television (NBC affiliate) in Salt Lake City. The companyâs working motto is âDo good, do well, make a difference, and have fun,â and it structures its innovative and successful business model on the three principles of 1) building its people, 2) making a difference in its communities, and 3) meeting aggressive financial goals. Bonneville enjoys a long-standing reputation and is known industry-wide for its values-oriented programming and its nationally recognized and award-winning commitment to serving the communities where it broadcasts.